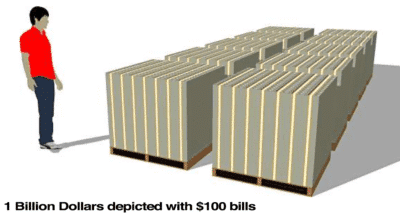 Wow! $42.3 Billion, according to Bankrate; that is what 3 banks, JPMorgan, Bank of America and Wells Fargo, collected in fees during one year, $6 billion of those fees coming solely from ATM and overdraft fees alone.[i]  Of course, these are the same banks that we taxpayers bailed out in October of 2008 to the tune of $16.8 trillion.[ii] We bailed them out because these banks had made such bad choices with their depositors’ money.  Remember this important fact: These banks didn’t lose their own money, they lost their depositors’ money, and that is why the US Taxpayers are paying them $16.8 trillion. 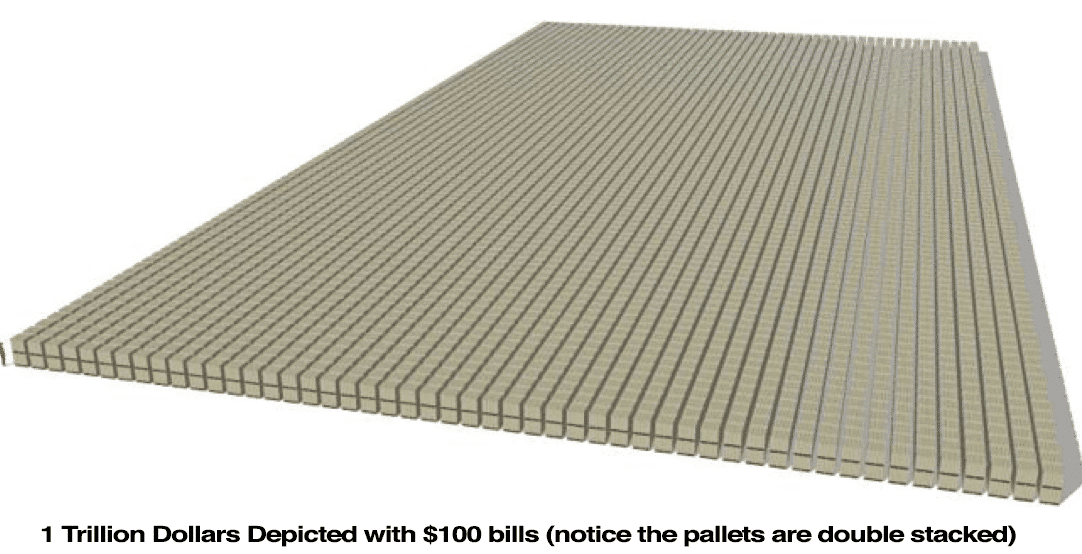 So, what does a trillion dollars even look like?  A trillion dollars would be $1 with twelve zeros behind it.  It looks innocuous enough when written out, $1,000,000,000,000 but it doesn’t give a good picture of how enormous this amount of money really is.

So, let’s first start with a one-dollar bill. “Stack 1 trillion of these dollar bills up and they would go almost ¼ of the way to the moon (59,714 miles) and would weigh about 10 tons.  Another way to think of $1 trillion is, spend $54 million every day of your life for the next 50 years and you still won’t spend $1 trillion of those dollars. Or, you could purchase the NFL teams, all of the Major League Baseball teams, the National Basketball Association teams, National Hockey League teams and the entire NASCAR operations and still have over ¾ of your fortune remaining.”[iii]

But, here’s the sad thing, with that $1 trillion, you couldn’t pay off all the student loan debt that is owed in this country, nor the credit card debt.

Don’t ever forget, taxpayers are not paying just $1 trillion back to these banks, we are paying $16.8 trillion.  And with that much money you could stack one-dollar bills up that would reach the moon and come back again two times over and get a quarter of the way up again.  It means that you could pay off all the student loan debt, all the credit card debt, purchase a $72 million Ferrari 250 GTO (the most expensive car in the world) and still provide free college tuition for four years to 112 million students.

This $16.8 trillion is the amount of money being paid by taxpayers to the very banks that lost our money in the first place due to their bad investments. Wow!

But what do banks do with their money?  And why didn’t they lose their money during the 2008 great recession like they lost their depositors’ money?  Here’s the scoop:  Banks favor an asset called Bank Owned Life Insurance or BOLI to protect and store their money.

“BOLI is a tax-favored asset which typically exceeds after-tax returns of more than traditional bank investments like Muni Bond, Mortgage Backed Securities and 5 and 10 Year Treasuries by 150 to 300 basis points.”[iv]   Which translates into a 4.01% annual yield or a tax equivalent annual yield of 6.68%.[v]  On top of these better than average annual yields, the bank that owns BOLI receives the death benefit on those life insurance policies TAX FREE!  All of this increases their return on equity, and their return on assets owned while they avoid the risks associated in the marketplace…the very risks they expose their depositors to on a daily basis.

Yet, the benefits of life insurance don’t end there for the bankers.  As the cash values in these policies grow, the bankers leverage these policies to offset their cost on other expenses such as: employee benefits, asset purchases, and operational costs. Doing so provides them with a tax break (which otherwise would be lost) and increases their profit margins. This is all accomplished while never diminishing the yields they earn in their BOLI.

Using BOLI as the banks do is as shrewd as it comes.  Having the government pay for their mistakes is even shrewder.  And when it comes to money management, Jesus tells us that the world is more-shrewd than the children of light.[vi]  Not that we should expect the government to bail us out from our own failures, but by using the methods the bankers employ with their BOLI, we can make sure we never need a bailout. That is brilliant.

Remember, it wasn’t the bankers’ money we taxpayers are paying $16.8 trillion for.  It was the depositors’ money that we are paying back that the bankers lost because they risked it where they wouldn’t risk their own money.  Bankers kept their own money safe as a bug in a rug, tucked away in an asset (BOLI) that has proven itself capable of stability, safety and sustainability for hundreds of years.  On top of that, these banks continue to collect $42,300,000,000 annually from their depositors.

Life insurance doesn’t have to be confusing. Protecting your own money and leveraging other people’s money will lower risk, all while receiving a better than average yield from the life insurance. This can provide you with more capital to use now and in the future.  To find out if you qualify, call 702-660-7000 today.