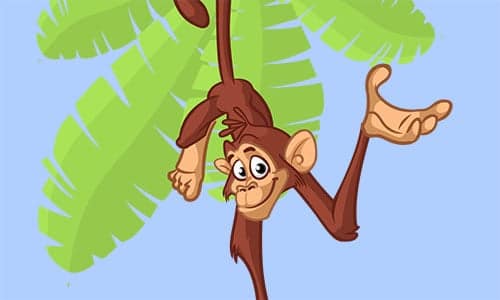 One dark night seven monkeys sat cold and shivering in a tree. It was cold outside. It was raining. One of the monkey’s said, “We should build a house.”

“Yes,” said the other monkeys, “let’s build a house tomorrow.” But when the sun came up the monkeys forgot all about building a house. They ran and played and had fun in the sun… but when night came it got cold, and it started to rain.

Again the monkeys sat in the tree, they were wet and cold.

This is the gist of a story I first read as a young boy sitting on the couch next to Mom, while learning to read.

This story was simple to read, but just because something is simple doesn’t mean that it isn’t profound, right? This profound story is, unfortunately, the story of mankind and the devastating results of a plan to “do it tomorrow.” This plan has literally destroyed productivity and wrecked the dreams of thousands.

Just a few months back I was talking with a 62 year old gentleman. He was calling because he’d been following Life-Benefits for a while, and he liked what we were teaching and what we had to offer, his predicament however was severe.

“I’m 62 years old,” he said. “I haven’t put anything away towards retirement yet, but I’d like to retire in three years, when I’m 65. Can you help me?”
We can help people with a lot of things but frankly, helping somebody save enough money in three years to support their next 20+ years of life would be a feat of incredulity. Yes, we will help him, but we can’t make up for his prior inaction…all the time he’s lost over the years. Still, getting started now is better than later or never.

How about the young man that first started studying and decided he would use the Perpetual Wealth Code™ 5 years ago, but didn’t get started till this year? The most common complaint we hear is, “I wish I would have known about this __ years ago.” Fortunately, most people that say this didn’t know any better. This young man has to live with the fact that he lost 5 years due to his own in-action, not to a lack of knowledge.

Now consider the couple that read, studied and scheduled a meeting to understand The Perpetual Wealth Code™ but then because they thought the world was going to end shortly, they decided to do nothing financially. Just recently they called back and asked if they could get something going, or if it was too late now.

And finally consider the family that was in the process of insuring their children and then stopped. Shortly thereafter their 7 year old was victim of a fluke accident and after an expensive life flight and expensive medical care she died. Not only did they lose their little girl which is tragic, part of her memorial is a daunting mountain of debt. What makes things even sadder, is that everything could have been paid for from the death benefit on her policy and given the family time to grieve and heal knowing that financially there was nothing to worry about.

There is a saying that says, “Procrastination is the assassination of life.” If you don’t do what you know you ought to do, than you’re going to miss out on what you could do if you would have done what you knew you should do. That’s wordy, but it’s true.

Many times people that complain about bad luck and no opportunities haven’t become the person that they need to be in order to take advantage of a “good opportunity.” It’s interesting how life works. When you become proficient at what you can do, then you get the opportunity of doing bigger things. It goes back to what Jesus said, “For to everyone who has, more shall be given, and he will have an abundance…”

So here’s a winning strategy that you can use to get more done now and ultimately accomplish what you know you need to do. It’s called the one-touch rule. It’s very simple, but the results are profound.

Here it is: When you touch something, either physically or virtually, don’t put it down until you’ve taken care of it COMPLETELY.

If you are holding your empty drinking vessel, take it to the kitchen, don’t put it on the counter where you or someone else will have to touch it again. Put it in the dishwasher. If you are reminded of a phone call you need to make, let’s say it’s to our office, Life-Benefits, just dial and call the moment you finish reading this. If you pick up a paper from your desk, and it’s the electric bill, pay it and file it. If you pick up a book that you’ve been meaning to return to whomever lent it to you, take it back to them or mail it.

There is one consideration; however, and that is left to your discretion. If it is not appropriate timing to complete something you touch, than make a plan to complete that task when you can follow through completely, in one-touch.
I will warn you, there will be plenty of logical excuses that arise and threaten to defeat your resolution to practice the one-touch rule, but if you persist long enough you’ll probably be surprised with how few things you touch that can’t be taken care of before you let go.

When you start accomplishing things before you let go of them, it’s amazing how you begin to accomplish so much more. That gives you time to do those things that you know you need to do. As a bonus, it makes you feel really good. I’ll never forget the first day I adopted the one-touch rule when Dad shared it with me a couple years back. I felt like I had sprung ahead a week in accomplished tasks, but in reality the day was still just 24 hours long.

When you accomplish the things you know you need to do, then unlike the monkeys you will have a house for the cold, wet nights, funds for the next new car, the ability to afford private education for your children, the joy of taking a nice vacation and the ability to invest in an opportunity that presents itself.
You will begin to notice that you don’t pay the price for action, you enjoy the price of action. You pay the price for in-action. I challenge you to apply the one-touch rule for 7 days. When you see the results, then you’ll be motivated to persist.

FUN FACT: By the way, Dad learned the one-touch rule from his mom so this is something you will probably share with your kids and it will be passed along in your family too.