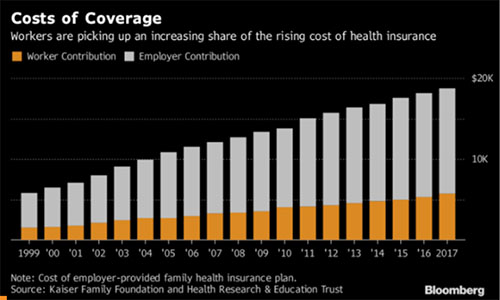 “The average worker in America is now shelling out $5,714 for a family health-insurance plan, 30% of the total $18,764 cost.”[i]  Five years ago, workers shouldered (merely) $4,316 of the $15,745, or 27%.[ii]  “Health care coverage has increased faster than wages and inflation.”[iii]  And while congress and the president grapple with easing the pain of the ever-increasing cost of health care coverage, Americans are suffering emotionally, economically and physically.

Health insurance in America dates back to as early as 1847 when the first comprehensive group health care plan was offered by Massachusetts Health Insurance in Boston. [iv]  In 1861 coverage was introduced for accidents due to travel by rail or steamboat.[v] Historically though, “hospitals were poorhouses where the indigent went to die.”[vi]  And health insurance coverage was called hospital coverage because hospitals were the beneficiaries of the insurance plan, not the person who purchased the plan.  In fact, during the late twenties, hospitals began to be concerned that their beds were frequently empty.  That was when they came up with a marketing scheme with the purpose of getting people to check themselves in to the hospital instead of waiting until they were deathly ill.  Some observant Baylor University Hospital official noted that Americans, on average were spending more on cosmetics than on their medical care.  And so “Baylor Hospital started marketing a way for teachers in Dallas, Texas to pay 50 cents per month, about as much as they were paying for their lipstick at the time, in exchange for Baylor picking up the tab on hospital visits.”[vii]

When the Great Depression came along, hospitals across the country experienced an even larger decrease in patient visits and length of stay, and so the Baylor idea became hugely popular with hospitals nationwide, in attempts to increase their bottom line. Eventually “The Baylor idea got a name.  It was called Blue Cross.”[viii]

During the second world war, employers needed ways to attract employees. With everything else being rationed, both Employers and Unions turned to benefit packages and health insurance coverage was one of those fringe benefits used to entice workers. By 1954, the IRS ruled that employer-based health insurance costs would be tax free. This boosted the idea of employer paid health insurance coverage even further.  And the ending result was, less than “9% of the population participated in health care plans in the early 1940’s and nearly 63 percent of the population was participating by 1954.”[ix]  In little over a decade, health care coverage went from nearly no participation to becoming a “necessity”!  And all because hospitals were looking to increase their profits.  So, there you have it.  A marketing scheme designed by Baylor University Hospital and initially offered to teachers in Dallas Texas, morphed into a nationwide phenomenon incentivized by government tax breaks and price controls. 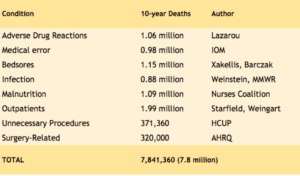 Today, with the Patient Protection and Affordable Care Act, the idea of health care coverage has been misshapen into a “right” instead of merely a means of making sure hospitals have enough business.  And ironically, more people today are killed due to this health care system than have been killed in all the causalities from the wars that America has fought in its entire history.[x]  According to the British Medical Journal, “Medical error is the third leading cause of death in the US.”[xi]  But that excludes all the deaths which are not associated with a diagnosis, while only counting those who have died with a diagnosis, but were mistreated for the diagnosis.  If one were to include ALL deaths, the death rate due to medicine would easily be the number one cause of death in America today.

Death aside, health care is big business!  And big business is always concerned with its bottom line.  In fact, when big business becomes a monopoly, government’s proper role is to step in and break up such a monopoly. No company or industry should be in a position to unfairly take advantage of competition or the public. But health care in America today has become a monopoly.  And it has been for years.

Pathetically, government has aided and abetted, what has become a heath care cartel, through tax incentives, regulations and judicial exemptions. These monopolistic privileges are disquieting to say the least.

For example, the Centers for Medicare and Medicaid Services (CMS) provides guaranteed grants to hospitals and outpatient clinics in 38 different states,[xii] under the auspices of improving health care in rural areas.  And yet, there is no controlled model for reducing or eliminating the death rate that these facilities and others like them perpetrate.  Another example took place in August, 1987. The American Medical Association was found guilty of depriving its practitioners of association with chiropractors, calling chiropractors, “unscientific cultists.”[xiii]  And yet, the fine imposed by this verdict has never been paid. But even more telling is that no government agency or office has intervened to demand that the AMA pay up, even though the Judge in the case ruled that the “AMA had attempted to destroy the chiropractic profession.”[xiv]  This is like mob rule.

Finally, consider that in February of 2011 the Supreme Court ruled “that going before a special tribunal set up by Congress is the only way parents can be compensated for the negative side effects that accompany vaccinations.”[xv] With a ruling like that, where is the incentive for medicine and drug manufactures to consistently and efficiently monitor their products’ performance or improve the efficacy of their services?  When the government prevents those injured or killed by such products and/or practices from seeking a fair and unbiased hearing and/or trial by peers, the government has become part of the problem, not part of the solution. (Interestingly enough, this tribunal referred to in this case, Bruesewitz vs. Wyeth, was set up by an act of Congress in 1986. To date, it has awarded nearly $2 billion in damages to nearly 2,500 cases since 1989![xvi])

As we can see, the more government has become involved with health care, the worse American health care has become.  This shouldn’t surprise anyone. Government meddling never solves something which can better be solved by fair and unregulated competition.  Restricting rights, piling on regulations or limiting free choice always makes situations worse not better. Meddling in health care coverage is no different.

Today with a president that understands the importance of competition, the value of free choice and the power of reducing regulations, there is hope on the horizon for not only better health care options but competitive pricing as well.  And while we await that anticipated hope, we are honored to recommend a great company that is making the lives of many Americans better by giving them a choice about their health care coverage today. 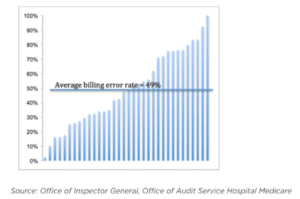 Take Command Health* is a company that provides you with an app that 1) Gathers your health care needs, 2) Considers your particular financial picture, and 3) Matches your needs and financial resources to the best care plan available in your area.  We commend Take Command Health for taking action in this arena to lower costs and improve value. Americans all across this great country of ours are benefiting from their services. We have used Take Command Health and are delighted with the options they provided us. Not only are we saving money, but the plan that we opted for is providing the competition that is so desperately needed in the health care arena.  Our plan promises to negotiate all medical bills.  This service alone will be tremendously valuable in helping reduce the escalating cost of medical care in this country.  Especially since, according to one source, nearly “50% of all health care billings are erroneous.”[xvii]

Call our office or click here for more information about how you can take control of your health care coverage.  Affordable Health Care is out there and thanks to Take Command Health* you can find it and benefit from it.

*Note: Take Command Health compares traditional health insurance plans and also faith-based sharing plans. Individual and Family plans are not available for comparison across all 50 states yet.  If your area is not available, email [email protected] and they’ll point you in the right direction.

Read our Website Legal Pages for information and disclosure regarding affiliates.