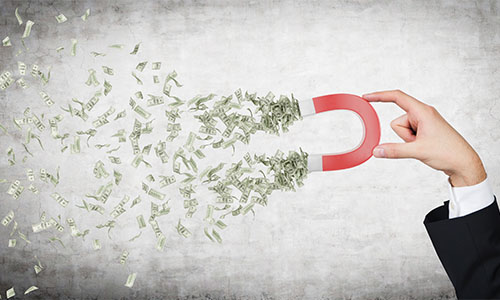 Editor Walter Updegrave’s article, entitled Recoup Your Bear Losses?, appeared in CNNMoney.com July 8, 2009. In it he stated that all we needed to do was “keep investing in stocks,” earn “a real rate of 12.8% a year until 2017,” and we’d be right back where we were before the Great Recession cleaned out nearly 50% of our invested savings.

Fascinatingly, while writing this blog, I searched Google to locate Updegrave’s exact wording, but the article wasn’t anywhere to be found.  All his other July 2009 articles popped up quickly, but not this one.  Finally, I went back to my own 2009 blog where I had quoted and referenced Updegrave, and then by pasting his exact wording, along with the article’s title (which had been changed), the article popped up in Google Search.

You might be saying, “Why all the fuss about one article?”  Here’s why…Updegrave was wrong! And he should be held accountable for that because people who followed his advice still don’t have the results they were expecting by following that advice.  That is noteworthy. 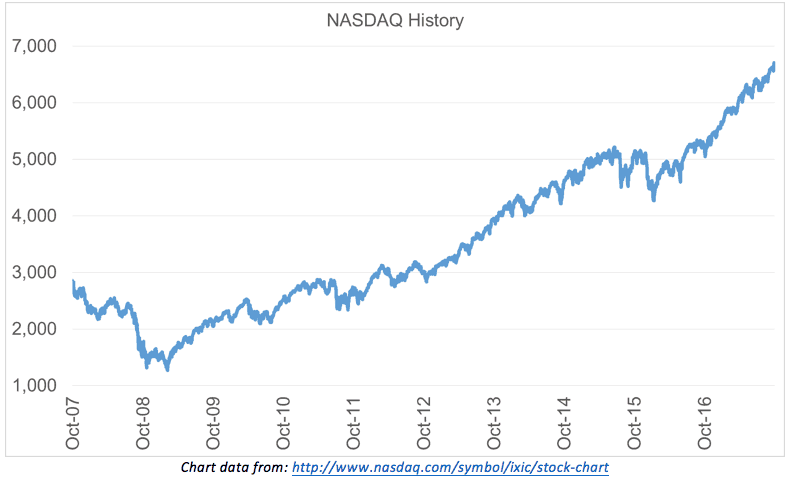 As seen above, investors are still shy of getting back to where they were in October 2007.  But there’s a bigger reason why Updegrave’s advice is so upsetting, and that is even if they were back to where they started in October of 2007, they would still be 10 years behind. And that means they will never catch up to where they could have been, had they not lost nearly 50% in 2007-08. Of course, the market correction wasn’t Updegrave’s fault, but that doesn’t excuse him from being responsible for the advice he gave to investors after the crash.

Another factor to be mindful of is inflation.  Over the past 10 years your dollar has lost nearly 20% of its value.  What cost $10.00 in 2007 now costs $12.19[i]!  That makes the losses hurt even more because investors, still not having recovered all their original investment value, now face an inflated dollar as well. This means they must earn even more to merely get back to where they were in October 2007. 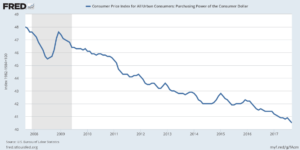 David Bach, the author of “The Automatic Millionaire”, depicts the growth of an investment over a period of time, 50 years to be exact, on page 48 of his book. He is spot on by encouraging his readers to start saving earlier than later because, as everyone knows, savings is the most important element in making sure you have the money you will need in the future.  But then, Bach illustrates how you can become a millionaire by saving very little, $3,000 a year for five years, while earning only 10% annually (what the annual return has been on the S&P 500 since 1926).  Granted he has the proper disclaimer at the bottom of the chart warning you that “Returns on all investment products will fluctuate. Investment return and principal value will fluctuate and your investment value may be more or less than the original invested amount.”  But he doesn’t appear to realize, and his readers most likely don’t or can’t discern, that such a statement strongly abolishes any probability of anybody actually earning 10% annually, while exposing you to a 100% risk of losing everything invested. The bottom line is, investments are risky and are not reliable.  Consequently, they cannot be depended upon completely for your future needs. 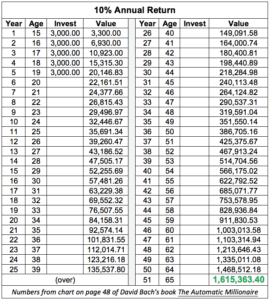 Think about it.  Less than 10 short years ago the Great Recession of 2008 wiped out most of the vast profits posted since the dot-com bubble of 2001.  And most investors are still clamoring to regain all that they lost due to that crash. This single significant fact eliminates any reason why you should trust or expect to build any kind of sustaining, let alone substantial, amount of wealth for your future needs by playing in the market. Furthermore, it should damper the misnomer that saving $15K will turn you into an automatic millionaire some day in the future, like Bach suggests on page 48 of his book.

In contrast, here is some important data you should know and understand, if you want to join the financial top 1% of Americans today.  According to Halpern Financial “The market ends each day in positive territory (only) about 50% of the time.”[ii]  Corrections “occur with regularity.”[iii]  And according to CNBC, March 13, 2017, that regularity is about “every 8 to 10 years, with an average loss of 42%.”[iv]  To put it bluntly, you have around a 50-50 chance of ending each day with a profit.  At the same time, you have a chance of losing 42% of your portfolio, principle and profits, every 8-10 years.  These stakes are pretty high if you are planning on becoming a millionaire or if you simply want to build a secure nest egg for you and your loved ones by trading stocks, bonds and/or mutual funds.  Of course, this applies to your 401k, IRA or 403b as well, if those funds are involved in these markets.

That being said, carefully examine the following:

Now realize that the above figures don’t take into account any inflationary depreciation of your invested dollar. Consequently, as mentioned earlier, your earnings will really have to be much higher in order to recover your losses after a market crash or correction occurs.  And keep in mind, market corrections materialize on a much more regular basis than most investors ever expect.

This leads us to seriously contemplate the power behind compounding growth delivered through guaranteed contracts versus speculative average rate of return projections. Here, it becomes important to differentiate the growth in tax deferred accounts (i.e., 401k, IRA, 403b etc.,) versus the growth in tax preferred and contractually guaranteed investment contracts.  For example:

This latter tax preferred investing strategy is used expansively by banks, corporations and non-profits, and it can be used by average individuals and small business owners as well.  The only drawback is that most investors have never even heard about these tax preferred investment strategies, and those who have tend to misunderstand the powerful implications of incorporating them into their portfolio.  But before we take a look at these alternative investment opportunities, let’s take another look at Bach’s chart on page 48.  There you will see he uses a 10% annual rate of return as his benchmark for figuring the compounding annual growth rate. 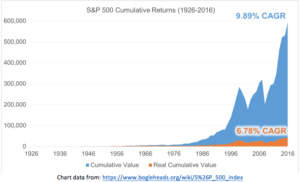 The unspoken caution here is that he is using the average rate of return for the S&P 500, which has certainly proven valid historically.  Interestingly enough however, the real rate of return for the S&P 500 has only been 7%[vi], historically. Thus, Bach’s figures don’t lie, but they certainly don’t properly portray what is most likely (or actually) going to happen.  Not to pick on Bach alone, realize that all those who preach this kind of financial doctrine concerning the time value of money tend to favor using average rates of return instead of actual rates of return.  The reason is obvious.  The higher average rates typically look much better than the actual rates. 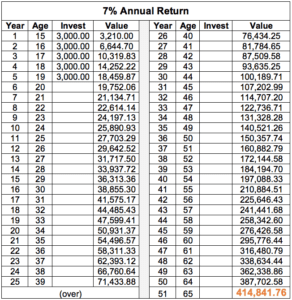 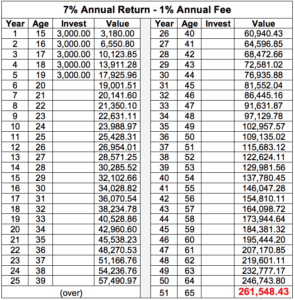 Finally, the growth that you experience in participating whole life policy will never face taxation, even as you use it to subsidize your retirement or leverage it to invest in other opportunities that materialize during your life time.  By following the IRS guidelines on how to access your money, taxes are no longer a consideration.  Furthermore, when you do exercise your right to leverage your participating whole life insurance policy cash value to invest in other opportunities, you won’t lose or give up that 7.31% tax equivalent compound annual growth rate. And that allows you to profit twice with the same dollar.  By keeping both the policy growth rate and the side investment growth rate, your portfolio can grow significantly faster and more securely. When the time comes for you to pass from this life and leave your legacy behind, your death benefit from the policy will multiply your assets, tax free, up to the first $5.6 million. And you will leave this world a better place, giving the next generation a step up financially, instead of leaving them in a position to start all over from scratch or having to pay taxes on what you left behind, in hopes of benefiting them.

Now back to CNNMoney and Walter Updegrave.  On May, 14, 2015, Updegrave wrote again in CNNMoney “My mother’s automatic response whenever I asked her for something she considers unreasonable…was ‘People in hell want ice water.’  Translated; just because you want something doesn’t mean you can have it.”[viii]  Updegrave wrote that anyone desiring to earn an 8% annual rate of return in today’s market deserves the same answer his mother gave him.  Yet, it was Updegrave himself said that a 12.8% annual rate of return was needed, back in July 8, 2009, in order to recover from the Great Recession by 2017. But now he tells us that “given today’s low interest rates and relatively lofty stock valuations, the consensus among investment pros is that we’re in for an extended period of low returns.”[ix]  He further quotes EFT guru Rick Ferri who estimates that “annualized returns will be around 7% long-term over the next few decades.”[x]  Fortunately, Updegrave ends up with some sound and solid advice which is “save more and spend less” and “avoid shooting for higher returns because that will create more volatility in your portfolio and your savings will get hammered during market meltdowns.”[xi]

All this conclusively demonstrates that participating whole life insurance is a fair, average or better than average savings vehicle.  It not only provides a better than average actual rate of return, compared to historical market trends, but it also delivers the liquidity necessary to afford opportunities while not giving up opportunity cost.  This, along with the guaranteed annual growth rate and the dividend participation that enjoys tax deferred compounding annual growth, are qualities that have been overlooked and undervalued. And when added to your portfolio, these qualities make the probability of you becoming an automatic millionaire much more likely and certainly protects you from losing 50% or more in any future market correction.