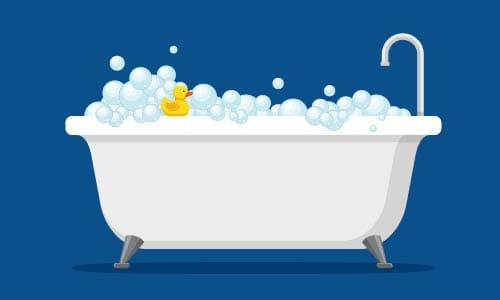 According to Say’s Law, “Sustainable demand must originate in production; valid spending must be derived from income earned in the process of supplying real goods and services.” But when credit (more money) is made and released into circulation by the Federal Reserve, or any central bank, real services are not increased and an artificial, unsustainable demand is created.  This is called a “credit bubble” and once born it grows exponentially or based on the whims and wishes of the central bankers and politicians. Ahh, some bubbles for the bathtub!

The good news in all this economic gobbledygook is:  There is no real loss of value when a credit bubble pops. All that is destroyed is the credit bubble itself.   But the reason those credit bubbles where created by central bankers like our own Federal Reserve Bank in the first place was to facilitate the transfer of wealth (assets) from the middle class to themselves, their cronies and the politicians.  The wealth and value isn’t destroyed, it is transferred!

So when so called economists, like Paul Krugman, suggest that we need to “plug the hole” in the bathtub by escalating credit they are simply saying that the American public needs to man up and make the rich richer at the expense of the middle class.  That is why credit increased from $28 trillion to $53 trillion during the 7 years from the last credit bubble bursting in 2008.  And all of that $53 trillion is going to be paid for with middle class tax dollars.  That’s called “sharing the wealth.”  By the way this is the most efficient way for politicians to access your wealth.

Insane as it may sound, credit expansion is always done on the pretense of obtaining “full employment” for American’s middle class.  Isn’t that a nice compassionate and socially responsible sounding term.  Yet the term “full employment” is mythological based on Census Bureau surveys and number crunchers who haven’t the slightest idea of what America’s potential labor force is or how much of that labor force is utilized on any given day, week, month or quarter.

Currently there are “210 million adult Americans between the ages of 16 and 68.”[i]  That means there are 420 billion potential hours of labor in America, if you believe most adults are capable of holding a full-time job at 2,000 hours a year.   Interestingly “only 240 billion hours were actually provided in 2014.”[ii] That means unemployment is nearly 43% not 5.2%, which the media, insiders and politicians are gushing about.  And this lack of employment comes on the heels of a $25 trillion credit expansion by the Federal Reserve to reach “full employment”!  Go figure.

As I said earlier, “full employment” is a myth.  The truth is that you and you alone are the only one capable of providing full employment for yourself. No central bank, politician or economist is capable or even willing to provide that liberty for you.  And the same is true about the money you earn from being employed.

No politician, banker, financial planner or CPA is more capable of keeping your money acting as an intermediary in the efficient exchange of goods and services for your best interest than you are.

You need to understand and implement the Perpetual Wealth Code™.  The central bankers, politicians, financial planners and the rest of that gang will continue to expand credit and destroy the value of the money you have been working so hard to keep and use for yourself.  And the reason that is, is because money today is NOT an intermediary of efficient exchange of goods and services.  Instead it has become a derivative of the debt.  The same debt that the Federal Reserve continues to create with a twinkle in their eye and the full approval of the politico hacks in Washington.

This means that if you don’t understand and implement the Perpetual Wealth Code™ you could very well become their next victim as you feel the burn of the current credit bubble exploding.  The current bubble makes the housing credit bubble of 2008 look like a toddler.  Having now “expanded to $1.3 trillion”[iii] with a complete lack of any tangible or redeemable asset backing it up, the student loan credit bubble could be the big one that the central bankers and politicians have been planning on for years.  Call today to find out what you can to protect yourself and profit from this bubble burst that is coming.