“But What If the Currency Changes or Hyperinflation Occurs?”

If history teaches anything, it is that government cannot be trusted with the management of money.  When the value of a currency depends entirely on the judgment and conscience of politicians, disaster looms. It doesn’t matter if they are Roman emperors, French revolutionaries, or our own Continental Congress.  Issuing money faster than the reserves that are on hand will literally make money worthless. That is precisely how the phase “not worth a Continental” came into existence.  Today the historical thread of inflation and currency fabrication continues.

In 1923 one of the most rapid inflationary periods in history occurred in post World War I Germany. This inflationary period wasn’t the result of increased borrowing necessary to pay the reparation costs of the recent World War but was the result of politicians insisting on printing more and more money even though nobody was purchasing the bonds necessary to back up that additional money.  The result was a loaf of bread went from 0.20 to 200 billion marks in a matter of months.  Millions of thrifty hard working Germans discovered that their life savings wasn’t worth enough to afford them a postage stamp. 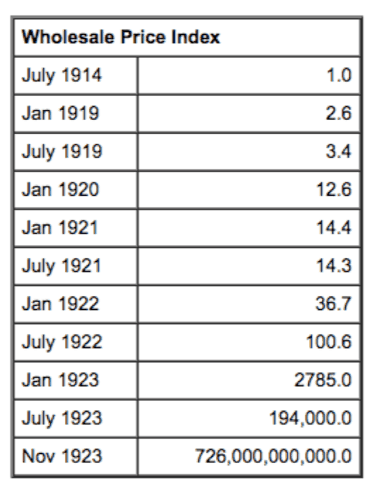 “The total value of paper currency cannot be increased by increasing its quantity; any increase in quantity which seems likely to be repeated will only lower the value of each unit more than in proportion to the increased supply.”[i]

So when, in November of 1923, the German bank Rentenbank opened its doors issuing a new currency backed by land, industrial plants and the promise not to issue more than 2.4 billion, inflation ceased.  Each new Rentenmark was valued at 1 Trillion old paper marks and by spring of 1924 when the new Reichmark was released, supported by drastic tax increases along with land and industrialization, inflation remained in check.

Today many worry about what will happen if hyperinflation occurs.  Or what might happen if the IMF releases a new currency? And the best answer to that is found by understanding history.

History proves that when a people trust and believe in a currency or a money supply it is because they trust the government that issues, controls or produces that money supply. When the government is no longer honored or trusted by the people, when their confidence is lacking or destroyed, then the people will ALWAYS rush to get rid of that money as fast as possible.  That is when hyperinflation occurs regardless of whether it be in Argentina, South Africa, Greece, Ireland, or even here in the United States

That is why participating whole life insurance is so valuable.  It is not a currency and it is NOT issued by any government.  Rather it is a contract based on things that people have always believed in, valued and cherished.  People value the idea of contractually banding together in mutuality to make sure that nobody has to suffer financially when a death occurs in a community.  From ancient Roman times to modern day America, people have pooled together, setting apart a small portion of their resources, to make sure this belief becomes a reality so that nobody should have to suffer financially due to the death of a loved one.  It is these mutual contracts of trust (participating whole life insurance policies) that sustain the value which people throughout the centuries have bound themselves to. They bring about the assurance that nobody needs to die without their financial obligations being met or their lofty aspirations funded at the expense of the next generation or surviving spouse.

Interestingly, some of the most powerful minds the world has ever known lived through the 1920’s German fiasco.  Max Plank, the father of the Quantum Theory and Dietrich Bonheoffer, the father of The Believing Church lived through this German inflationary period.  But instead of being overcome and relinquishing hope they pressed forward with determination and ended up creating wealth than couldn’t even be imagined…Wealth the entire human race has benefited from and continues to benefit from today.

These two men’s ability to thrive in the midst of financial and social ruin was based largely upon their values.  And those values are worth revisiting today.  For example, Planck was raised to respect scholarship, honesty, fairness and generosity and because of this he was able to keep focused through difficult times and create an abundance. Bonheoffer’s values on the other hand are summed up in this statement he wrote to a friend and colleague, “To procrastinate and prevaricate simply because you are afraid of erring seems to me almost to run counter to love.  To delay or fail to make decisions may be more sinful than to make wrong decisions out of faith and love.  Too late means never.”

Today many hover over the action steps they can easily see and could take which could make them more successful.  In the process they not only squander the wealth they could have gained and enjoyed but they unintentionally rob the entire world because of their indecisiveness.  Joining together in mutual contracts to prevent others from loss is an awesome way to avoid inaction!  Not only do the resources you set aside to accomplish this benefit you, these same resources multiple many times over by advancing others along the way and that helps everybody including the next generation.

Andrew Carnegie once mentioned that life insurance is one of the pillars of Americanism.  It allows the average person the opportunity to save while creating a legacy, without being penalized for leveraging these resources.

When hyperinflation or a currency change does occur there will be an exchange rate.  History has documented this occurring time and time again.  Those who have saved in a value-based entity that is mutually maintained will not be found lacking or needy when this happens because of the rate of exchange that will occur.  Others will not be as fortunate.

[i] The Nightmare of German Inflation