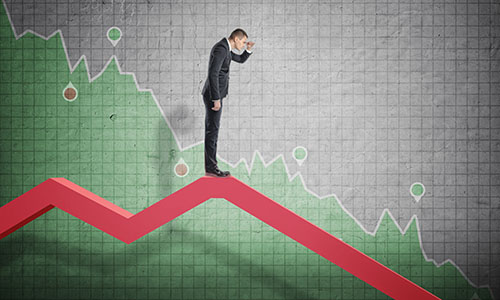 Imagine this for a moment. You deposit money into your savings account. And when you open your bank statement at the end of the month you find the bank has charged you interest instead of paying you interest.  That is negative.

Why is it that banks all over the world, including the Federal Reserve Bank, are either  talking about or have already gone negative?  Here is the dirty little secret that most people don’t understand and bankers don’t want you to know about:

When central banks lower interest rates, they make more money.  Now I know that’s a plucky statement, so here’s the math to back it up.

By adjusting the interest rate on savings the central bankers have doubled their profits.  And yet all the talking heads and Wall Street are clamoring for lower interest rates. And here is the reason behind that.

Lowering interest rates is the fastest way to transfer the money of savers to those who are the borrowers.  This scheme of central bankers has been going on for a long time.  But it has escalated since Nixon took us off the gold standard in August of 1971.  That is why what $100 would have purchased in 1971, now costs $585 today (2016).[i]

As you can see, your dollar has lost 485.5% of its value over the past 45 years.  And this is due to the fact that central bankers not only mess with the interest rates to earn more money but they also put more money into circulation, further skewing the value of your dollar.

Clearly the typical American citizen hasn’t a chance to accumulate enough money to retire comfortably on or even enough to improve their standard of living due to these banking manipulations.  And so we have seen the demise of the middle class and a progression of the polar extremes in America because of this banking fiasco.

Obviously, the only solution for the middle class is to regain control over the interest rate they earn as well as how often they use each dollar they save. If this solution is not put into place, the middle class will become extinct.  Fortunately, at Life Benefits…we assist those who see this banking fiasco for what it is AND are willing to do something to stop the progression of it in their own life and the lives of the ones they love the most.

Going negative is not the solution to our economic woes.  Going negative will only make the central bankers more profitable and the middle class poorer.  Don’t play the game the bankers tell you to play.  Discover how you can beat the bankers at their own game by using the Perpetual Wealth Code™.  Call 702-660-7000 today for your complimentary consultation to see if you qualify.  Stop going negative now.