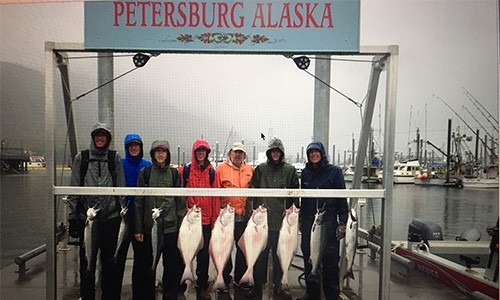 Instead of blogging, Tom’s gone fishing. It’s not that he’s an avid fisherman or anything, but when he decides to go fishing, he goes fishing.

His biggest catch was in the summer of 1990. He stopped by my parents’ house early one summer morning, picked me up and took me to the Little North Fork to go fishing. He didn’t catch any fish that day. He was too busy untangling my line, helping me bait my hook, taking care of the fish I caught and generally continuing to make a most favorable impression upon me. Within a month we were engaged to be married. I was a keeper.

Before I met Tom, he had worked in a fish cannery in Alaska, earning money for college. In more recent years he’s been dreaming about taking the family on a fishing trip to Alaska. I can say dreaming because although we’ve talked about it, and he’s made a couple of inquiries with contacts, he hasn’t actively pursued the making of plans for the trip.

Then a few weeks ago, the opportunity for Tom to take four of our sons to Alaska, almost dropped in our laps. In fact, when the trip was first mentioned thoughts of scheduled work and deadlines almost dismissed the opportunity. Besides it wouldn’t be a trip for the whole family, which troubled the would-be trip takers. But those of us to stay behind whole heartedly gave them our blessings to go. The work schedule was re-examined and some of our self-imposed deadlines were adjusted. And within 48 hours trip plans were solidified.

So that’s where Tom, John, Ben, Jesse and Steven are today. Fishing the icy cold waters of Alaska…and presumably having a marvelous time!

Those of us at home are working in the office. But it’s amazing how quiet it is. Turns out those guys make a lot of noise! Fixing meals is a quicker process considering we have fewer to serve. Since we’re missing four normal sized male appetites and Steven’s gargantuan teenage appetite, there is far less food to prepare, but admittedly, it’s not quite as enjoyable either.

Truly, we miss them. But we’re glad to know that they are having a wonderful time together, making memories that will last a life time. We look forward to their return, complete with fishing yarns and hopefully a few halibut and salmon dinners for the freezer. And since we also delegated them as our scouts for a future family trip, maybe to include friends, acquaintances and clients, they will also have a report to produce.

So, while they are gone fishing, we hope you too are enjoying the true wealth of spending time with family, friends and fun summertime activities.