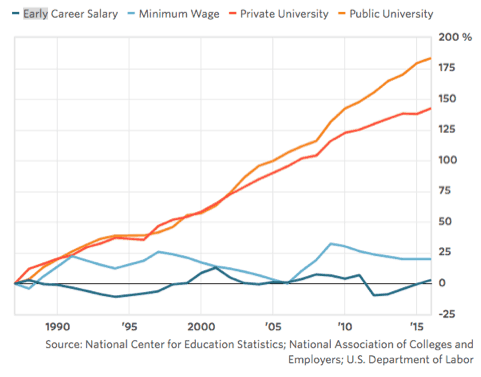 Attending a university or college used to provide a path to a better income.  But “In 1987-1988 the average four-year universities and colleges were charging $3,190 a year for tuition.  Today, with prices adjusted to reflect 2017 dollars, that average cost has risen to $9,970 a year.  Which is a 212.5 percent increase.”[i]

This means that in 1987-1988, it was still possible for a student to graduate from college without debt, enter the work force, AND begin saving for retirement immediately.  Today, when a student graduates, even though they may have worked while attending school, chances are high that they will still owe money on their education.  Therefore, if they are able to enter the work force immediately after graduation, they will still not be able to save as much as someone who has incurred no debt during school.

It is evident to see that tuition costs have increased astronomically while wages have stagnated.  This has produced a very large gap between wages and the cost of a college education today compared to prior 1987.

Unfortunately, such cost increases have literally consumed the saving power of the majority of American college graduates.  And without their saving power, they have been thwarted from achieving the American dream or a bright financial future.

Furthermore, as baby boomers retire at the rate of over 10,000 per day, these lower wages and lack of savings becomes a greater and greater liability to college graduates. That is because the taxes required to pay for the ever-increasing cost of the Boomer’s retirement, will have to come out of their pocket.  In fact, it has been shown that the cost of Medicare and Medicaid alone will nearly double for a Boomer over what it is today.[iii] According to the US Census Bureau, there are 74 million baby boomers in America. So, who will provide the money needed for these 74 million Boomers Millennials as “it will take until 2028 before Millennials outnumber the Boomer population?”[iv]  Especially since Millennials are not earning or saving the money necessary for these future expenses.

Of course, the answer lies not in new government regulation but in deregulation, much like President Trump is delivering.  Deregulation will allow a path for full employment to occur once again in America.  Once full employment is attained, then wages will naturally rise as workers will again have the leverage necessary to demand higher wages for their skills.  These higher wages will increase taxes collected and those taxes will help supply the need required for the Boomers.

Naturally, skilled workers will be the ones who will fill the demand for those higher paying jobs and occupations more readily than mere college graduates.  That is because college and universities are not necessarily equipped to teach these skills but have become indulgent by offering degrees and studies which neither develop new skills nor sharpen old ones.

Which brings up another point and that is, 529 college savings plans.  Under these circumstance, these government sanctioned savings plans may not be the best method of saving for your child’s future education.  Not all education takes place in a classroom and 529 plans are limited, without taxation, to be used for college tuition.  Thus, your 529 savings plan may or may not benefit your child who is desirous of developing greater or new skills and not necessarily a college degree.  Perhaps a better option would be to park your money in a participating whole life insurance policy so that the cash values will be available for any pursuit your child may have, not limited to merely college or university tuition.

That is because, until wages begin to rise, time spent in college or universities may be more of a hazard to your child’s overall financial well-being. Humbly learning and sharpening the skills that will give your child ready access to those higher wages may be the better opportunity.

College and a university degree can be beneficial for certain professional occupations but always consider the cost versus the risk.  Realize that a degree can be earned anytime in the future, but the cost of lost wages and debt incurred are difficult obstacles to overcome once they have begun to compound against you.