Happy Mother’s Day to All You Husbands and Fathers 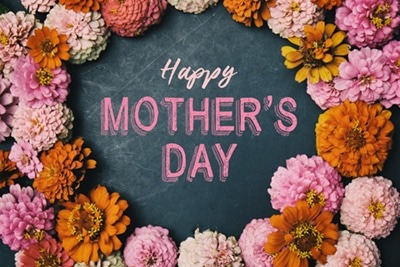 It’s been said that the best thing a father can do for his children is to love their mother. Mother’s Day is one day of the year that we have set aside to honor our mothers and the mothers of our children here in the United States.

In 1868 Anna Jarvis organized “Mother’s Day Work Clubs” to instruct local women how to properly care and tend to their children. In 1908 Jarvis held a memorial for her own mother at the St. Andrew’s Methodist Church in Grafton, West Virginia. This she accomplished with the financial backing of John Wannamaker, the famous entrepreneur and department store originator who also held Mother’s Day events in his retail store throughout the Philadelphia area at the same time.

Jarvis, a single, childless woman, determined to make Mother’s Day a national holiday, and she started a massive letter writing campaign to politicians and newspapers to accomplish her vision. In 1914 her efforts were realized when President Woodrow Wilson signed the order making the second Sunday of May the official Mother’s Day in the United States.

Amusingly, even though Jarvis willingly accepted the funding of Wanamaker to organize, fund and support her efforts in gaining national recognition of Mother’s Day, she opposed the commercialization of what she said should be a “personal celebration between mothers and family.” She visualized that the day should be spent with mothers wearing white carnations as a badge of recognition for visiting their mother or attending church that day. How so many white carnations might be obtained without some form of commercialization evidently never occurred to Jarvis as she later spoke out against florists, charities and confectioners, for capitalizing on her special day. She even filed lawsuits against those using the name “Mother’s Day” and eventually expended all her wealth on legal fees. Up until her death, Jarvis actively lobbied the government to remove Mother’s Day from the calendar.

To all you men out there, we are encouraged to “love our wives even to the point of giving up our own life to provide and protect hers. And if we don’t love our wife we really show we don’t even love our self.” When this love isn’t expressed, divorce rates escalate. Today divorce rates, for first time marriages, range between 40% to 50% in America (though they are much higher for those formerly married.)

Loving, providing, and protecting the woman that you married is a central part of a nurturing relationship. Unfortunately, such values too frequently are mislabeled misogynistic when in actuality, such values portray genuine love and respect. And those who label men who love and respect women as misogynists essentially are misandrists (people who hate, dislike and/or distrust men.) And, as you might suspect, misandrists don’t necessarily belong to one particular gender.

John Wanamaker was a man of respect and making provision for others. Being the most insured life in America at the time he funded the founding of Mother’s Day, Wanamaker knew that with the first premium he paid on his life insurance policies he was delivering the love, provision and protection that his wife and family needed. And being a very wealthy man, he had many, many other ways he could and did express his love, provision and protection.

Today, life and disability insurance remain the surest, safest and most sustainable way to provide the love, provision and protection that your wife needs when, not if, you are no longer able to physically do that for her. We men, statistically get disabled more frequently and check out of this life several years sooner than most females do. And that should motivate you, as a husband, to make sure you are adequately insured so that your love, provision and protection, will continue to sustain and provide for your wife, even if you become disabled, and when you pass on. Ironically, doing so proves to yourself how valuable your own life really is.

“It’s not the cost but the thought that counts,” holds true with life and disability insurance. And that’s because for pennies on the dollar your love, provision, and protection that your wife needs can become certain, regardless of what happens in the future.

So, this Mother’s Day, we would be honored to review your disability and/or life insurance coverage to make sure everything is in order. And if you don’t have any coverage, you can remedy that for pennies on the dollar. Remember, knowing that the longer you hesitate the greater the risk you assume that you will never be able to deliver the love, provision or protection that your wife really needs, or that she desires and should expect.