Inflation: The Stealth Tax and How You Can Fight It 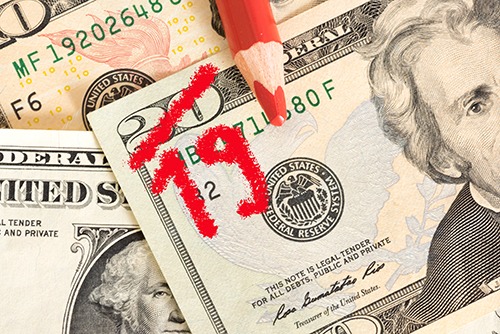 Make no bones about it, Global elites intend to destroy the personal wealth of Americans.  Politicians and bureaucrats raise your taxes by altering how much you can make before you pay income tax and by changing the rate you pay on that taxable income.  They accomplish this through the legislative process and so, for the most part, it is blatantly obvious  to anyone who is paying attention.  But politicians and bureaucrats raise your taxes covertly by using the stealth tools which they have given to the Federal Reserve which is called Monetary Policy.

Monetary Policy allows the Federal Reserve Board, also known as the Central Bank, to set interest rates, print money or tighten money supply, regulate foreign currency exchange, increase or decrease the amount of money banks are required to hold in reserves and purchase government debt.  How the Central Bank uses these tools can increase or decrease the value of your dollar which you have earned and saved.

Most everyone hasn’t a clue about this serious devaluation of their money.  This is because inflation, the devaluation of your dollar, is blamed on greedy merchants, farmers, producers and manufacturers. This is easy to do because merchants, farmers, producers and manufacturers have to keep raising the prices of what you must pay them in order to stay alive themselves.

Modern Monetary Theory maintains that Federal Government(s) spending should not be subject to the currency controls that regulate everybody else’s money.  Thus, Modern Monetary Theorists are forever advocating the allowance of the Central Bank to print all the money politicians and bureaucrats want to spend.  Thus, we have a President in the United States lying to everybody by saying spending $3.5 trillion and $1.5 trillion, which is now being considered by the congress, will not cost you anything.

Think about this, Modern Monetary Theorists expect you to believe that diluting the value of your dollar by adding another $5 trillion to the money supply won’t cost “We the People” a dime.  Fools!  If you diluted their drinks even 1/10th the amount of which they are intending to dilute your currency, they would scream bloody murder and strip you of your liquor license.

The fact remains, you can’t dilute something and not effectively increase its overall cost.  If you order a glass of orange juice and the server dilutes it with 50% water, then you would have to spend twice as much to receive the same amount of orange juice. Dilution is not the solution to the socioeconomic problems we face today any more than dilution was the solution to pollution back in old days. If you earn a dollar today and that dollar is worth only $0.50 tomorrow because the money supply has been diluted by the Central Bank, then the cost of everything you purchase has effectively doubled. There is no free lunch and those who believe and act like there is literally become leeches to the rest of society.

But politicians, bureaucrats and the global elites already have an answer for when prices soar even higher than they are today.  They will blame the greedy merchants, farmers, producers, and manufacturers.  Why? Because it has worked so well for them in the past.

You see Modern Monetary Theorists really want everyone except themselves to be poor and dependent. But this flies in direct opposition to the American way of life.  Benjamin Franklin told his European associates who wanted to come to America that “Everybody works in America.”  This was foreign to the elite Europeans because only the poorer classes had to work in Europe.  The poor worked to support the elites who then doled out to the poor what they thought they deserved.  This is exactly the type of society that today’s Modern Monetary Theorists want to resurrect.  A two-class system, the workers and the elites.   In order to accomplish this, they must continually badger, blame and blast capitalists, because it is the capitalists who have made upward mobility possible for all classes of people.

Granted there is still a poor class in all capitalistic societies.  But Jesus himself stated, “The poor you will always have with you.”  Politicians, bureaucrats and the global elites will never be able to eliminate this class of people no matter what they promise, for two major reasons, 1) It is contrary to what Jesus stated as fact, and 2) They never intend to accomplish this feat but only hide behind this utopian ideology to obscure their real intentions of creating a two-class system.  Unfortunately, the corporate world has become deeply rooted in this ideology.  Corporations raise trillions of dollars to fund environmental, social and governance programs, dovetailing with Modern Monetary Theory to create what they are call The Great Reset which is nothing more than the establishment of a two-class system.

The danger inherent with a two-class system is historically known:  Both classes, the poor and the elite, will suffer economically in the long term.  You can’t enslave an entire group of people to serve the special needs and desires of another group of people without demoralizing the entire population.  Historically, a demoralized society always reverts to the law of self-preservation, “each one for themselves”, or survival of the most physically capable.  This, ironically, is the polar opposite of what those pushing Modern Monetary Theory imagine will happen.  Sitting in their ivory towers, which will become their glass houses if their Great Reset actually materializes, they believe they are ushering in a real Shangri-La.

The best way for you to fight the Great Reset, the brainchild of Modern Monetary Theorists and their inflationary Central Bank Monetary Policy is to stop playing their game.  Yes, you still have to use their authorized currency, whatever it may be at the time (U.S. Dollars, some form of cryptocurrency, or whatever other currency they determine might best control and enslave you), but you don’t have to store that currency in a place subject to their inflationary policies.

Imagine purchasing something where you can use the money with which you made your purchase again!  Not just once, but as many times as you like.  Think how this would reverse the effects of inflation in your life.  So as Monetary Policy devalues your money, the money you have stored is able to purchase twice, three times or more than what it normally could have purchased.  Thus, what has been stolen from you via inflationary policy is restored to you through wise money management, greatly decreasing the cost of inflation in your life.

God promises to all of us, as Paul wrote in his first letter to the Corinthians, “With every test and trial you experience, you will not be tested or tried beyond your power to overcome.”  Today our society reflects the image of ancient Corinth which was also known for its vices, immodesty, immorality, and corrupt legal and monetary system. Corinth became known not only because of Aphrodite, the pagan god of immorality, but for the verb kornithiazomai which means “to act like a Corinthian”.

One way you can escape the immoral practices of the Central Bank and Modern Monetary Theorists today is to team together with like-minded people, pool your money together, whatever money the Central Bank so happens to be using at the time, and beat the system.  In doing so, you can control a portion of that money which has been pooled, and manage it yourself.  By taking this responsibility upon yourself, instead of allowing others to manage your money for you, you will have empowered yourself to overcome the trial called the Great Reset.

Those who really understand what the Modern Monetary Theorists are attempting to accomplish in our world, have purchased, and continue to purchase, large amounts of participating whole life insurance which is truly an asset and not an investment.  Life Benefits, LLC was founded, to help you overcome the inflationary policy which Modern Monetary Theory is subjecting the world to, today.  Call us.  We can help you overcome this critical economical trial. You must take action before the current inflationary policy has destroyed your ability to save.