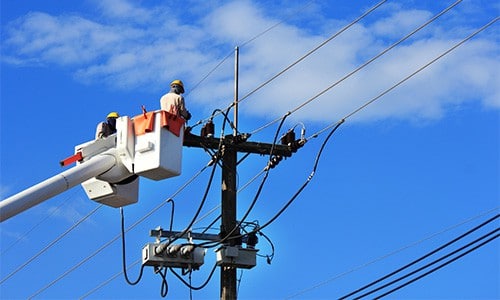 It is with great pleasure that I introduce our guest blogger this week.

And he’s not the only one who could tell you a similar story. There’s Michael whose office flooded while being re-roofed…a contractor’s mistake that created a financial challenge that lasted for a year. Or how about Margie whose fire sprinkler system malfunctioned…and the list goes on because “Life Happens!”

It was June 1st in Oskaloosa, Iowa and the local power company was working to install a new transformer on the power line.   They worked for awhile and then checked to see if their efforts were producing the desired effect, namely to restore power to the lines.

*BANG* —there it was again!

This was not anything like “3rd time’s a charm” this was “3 Strikes, You’re OUT!”

With that, the power company discovered that the new transformer they were trying to install was shorted out completely. The source of their troubles discovered, they quickly repaired the problem, and power was restored to the buildings in the area including my chiropractic office.

With the power back on everything should have been good to go, right?  Well almost, but not quite.  You see, I soon discovered I had a small difficulty with my digital x-ray unit… it wasn’t functioning properly.  I phoned the tech and soon he was in my office looking over the unit.

He went through all the usual diagnostic checks and then proceeded to tell me that the “small” problem wasn’t so “small,” actually it was a very big and bad problem… and would probably be extremely costly as well.

You see, the power surges we had experienced while the power company was fixing the transformer had totally destroyed the digital receiver on my x-ray unit.  Furthermore the company that had originally built my x-ray unit was no longer in business and there were no new or used parts to repair my machine.  I would have to replace the entire unit, and it would cost me $58,700!

Well there I was, stuck without an x-ray unit and surrounded with patients needing my help.  Not a desirable situation, if you see what I mean.

Right at this moment I was faced with two choices.

I chose option 2, and after making a few calls to pick the right equipment and place the order, we were back up and running.

Because of the flexibility in management options that we have available to us by using The Perpetual Wealth Code, I’ve opted for an easy payment schedule that will allow me to have the entire $58,700 plus some extra back in my account, ready to use again within a few years.

Oh, and I’m really glad I didn’t have to choose option 1, because here it is more than a month later and I still have yet to hear whether the insurance or power company, if either, will be reimbursing me for the unit that died back on June 1.