Riding In A Police Car 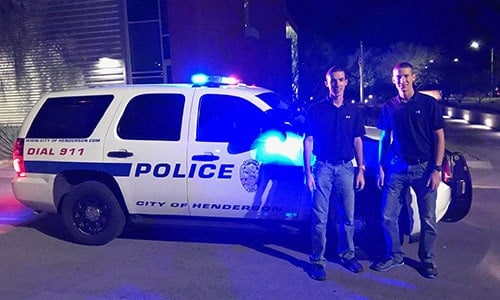 I’d been to prison before, but I’d never ridden in a police car until last Friday night.

Of course, I only went to prison as a visitor doing volunteer work, and last Friday night I rode in a police car as a ride-along, it was quite an experience.

Henderson, Nevada has ranked as one of the top ten safest cities in the US for some time, and since moving to Henderson a couple years ago, I’ve been impressed with the quality service provided by law enforcement.  So, Jesse (my brother) and I took the opportunity to do a ride-along with the Henderson Police Department.

Of course, we wanted to experience as much as possible, so when scheduling we asked the lieutenant for the busiest area and the busiest shift. That led to riding along in the north area command of Henderson on Friday night during swing shift.

We experienced a number of calls that evening. Jesse’s first call was to break up some domestic battery which terminated in taking a woman to jail.   The woman was far from happy and assured the officer she’d never been to jail before.  Once arrived at the Henderson detention center, it turned out she had a record of beating people up for many years, and has been a frequent jailbird.

One of my first calls was petty larceny at Wal-Mart. Henderson Police Department has a program that supports businesses doing what is similar to a citizen’s arrest.  The business fills out paperwork and gives the offender a court date. If the offender doesn’t show up in court, then there will be a warrant issued for their arrest.

This system keeps the jails from overflowing with petty larcenists and saves room for the more serious offenders. The thief was still onsite, and we stood by to support Wal-Mart’s security officer while he did the paperwork. Despite not having to go to jail, the thief almost ruined that opportunity when she started cussing out the Wal-Mart security officer. In the end, she cooperated though, and in addition to setting a court date, Wal-Mart trespassed her off all Sam’s Club and Wal-Mart properties for the rest of her life.

We pulled over a couple vehicles… one was cited for expired California plates (almost 1 year out of date) the second was to make sure a driver was sober since he had been drifting.  It turned out he was recovering something off the floor, so the officer just encouraged him to be careful.

Most of the other calls were domestic disputes… pretty ludicrous too. Even though some people are classified as adults, they’ve never really grown up, and they still fight like school children, but at a different level.

There was one very sad call that evening. A woman had left her young daughter and son with her boyfriend of six weeks while she went shopping.  Upon her return, she called the police to report that things had not gone well for her 4-year-old daughter. Four officers, including the officer Jesse was riding with, and a detective showed up on the call. It took over an hour to get statements from everyone involved.

The officers were glad they could take him to jail on other warrants too so that they wouldn’t have to continue standing around in the dark at the trailer park while the detective interviewed the boyfriend.  The detective would interview the boyfriend, in jail, the next day.

After that call and some dinner, we stopped on the side of the road where a car was parked on the shoulder facing traffic.  We discovered some people with their dog, a pit bull, that had just been hit by a car.  They were holding it down, waiting for someone they’d called to come lift the dog into their car.

The officer and I picked up the dog, dripping with blood, and put it in the back seat.  It had been smacked pretty hard, but was still mobile; it turned itself around, and sat up to look out the window. It is a good thing pit bulls are so tough. I think the dog will pull through okay. 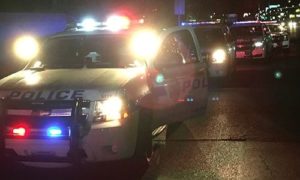 The final call of the day came on our way back to the station at the end of swing shift.  It was a call for back-up from the officer Jesse was riding with! We sped through the night to get there quick!  Soon we could see the flashing blue lights.  We crossed a concrete median, made a U turn, pulled up behind the first police car and jumped out.

The officer Jesse was riding with had pulled over a car with an expired registration and the man driving had three warrants out for his arrest; one from North Las Vegas Police, one from Henderson Police, and one from Las Vegas Metro where he was wanted for manslaughter!

The officer I rode with, advanced carefully on the passenger side of the vehicle while Jesse’s officer advanced on the driver’s side. By this time, several other officers were showing up and together they had the man get out and stand with his hands on the hood of the first police car.  They patted him down and arrested him.

His girlfriend had a warrant out for her too, petty larceny I think, nothing they wanted to fill the jail with, so they were considering letting her walk home, since she didn’t have a valid driver’s license.  But then they started to do an inventory on the car and found heroine paraphernalia in her door. In the trunk, they found cocaine paraphernalia and a possible fraud factory. The officers quickly decided that the girlfriend had better accompany her boyfriend to jail, so they were both hauled off together.

When everything was taken care of we headed back to the station about an hour after swing shift had officially ended. The officer I rode with, parked in front of the station took a picture of us beside the car and joined us for a selfie so that you would have pictures to go with this blog! 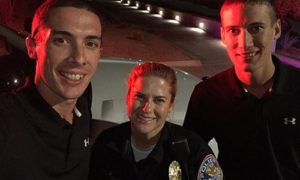 After a night on the streets with Henderson Police, there was one thing that stuck out like a sore thumb: People who have made one bad decision have oftentimes made a lot of other bad decisions too… it’s sort of a theme in their lives, and they have warrants to prove it. You’ve probably noticed this theme yourself in your dealings with others haven’t you?

Of course the opposite is true as well, people who make good decisions have often made a lot of other good decisions too… it’s sort of a theme in their life and they have results to prove it!

We’re in the business of helping people make wise financial decisions every day.  How do you help people make wise choices?  Do you make wise choices in every area of your life? All choices we make are based on our thinking, and our mind thinks about what we are around. This is one of the reasons we host The Wealth Summit every year. We want you, and everyone we serve, to have the opportunity to spend time with and learn from people who consistently make great choices, because when you associate with greatness, you will become even better. The overwhelming majority of Wealth Summit attendees tend to make good choices planning for their futures, taking care of their responsibilities etc.

Never underestimate the power of any influence on your mind no matter how small it may seem.  No snowflake ever blames itself for the blizzard, but each one plays a part. There are life lessons to be learned everywhere, even while riding in a police car!

Are you looking for good financial influence for your mind? Listen to: Wealth Talks a podcast available on iTunes and Google Play.