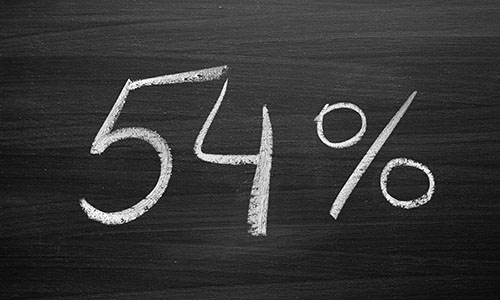 Wealth is a lot like sex, delaying gratification can pay off big time.  And though this statement might sound trite and old fashioned there are millions and millions of case studies that prove its validity.

In a recent study in the The Wall Street Journal, researchers compared the willingness of Americans to delay financial gratification and were astonished by the results.

When offered a monetary gift or reward, the subjects could have the money now or have more money if they waited.  “54% was the whopping rate of return that would render Americans indifferent to waiting versus not waiting”[i]!

This is insane.  How many of these same individuals would expect to see their portfolios grow at such astronomical rates of return?  Astonishingly, it may be more than less.  And perhaps that is why so many Americans chase the market, seeking to find impossible rates of return instead of being patient and realizing that over time a lower rate of return, which is guaranteed, will out perform a higher rate of return that can evaporate and obliterate everything that appeared to have been gained very quickly.

The time value of money is an incredible factor that most Americans don’t realize is either working for them or against them.  Not knowing or appreciating this, the time value of money most often works against them.  For example:  A dollar earned in 1980, 36 years ago, has had to increase in value over 3x to stay even with what was saved 36 years ago.  And a dollar saved in 2000 has to be worth 40% more today (2016) otherwise the dollar saved 16 years ago has cost you money, rather than making you anything.[ii]

Patience is a virtue but tolerantly waiting around only to have inflation steal the value of your savings is NOT good for your wealth.  And certainly nobody looks forward to having less after saving more throughout their lifetime.  But that is exactly what is happening to millions of Americans.

The secret to gaining wealth again is to realize and appreciate that the time value of money can be controlled by you!  When you take the helm and start to control this little appreciated fact the volume of interest that you can recover overcomes the inflationary destruction and devaluation of your money.  This new flair of control on your part permits you to become the benefactor of recovered capital which provides you with greater wealth.  It also overcomes the debilitating circumstance that your dollar keeps shrinking in value over time.

Too good to be true, you say?  Well, ask Dr. Google.  Dr. Google will inform you that over 50% of all banks and large corporations are now using the time value of money to recover money that they have to spend on purchases, health care plans and retirement plans while maintaining liability coverage against market corrections like 2008.  In fact, according to Aon Hewitt, large corporations are adding over $1 Billion a year to the pool of money that they control in order to recover money they have to spend on these very things.

It all starts with realizing how powerful the velocity of money is and then developing the patience to overcome the urge to get rich quick.  Once to that point you’re ready to apply the modest methodical method that guarantees to provide greater wealth for those who adhere to this normal everyday methodology.  The methodology referred to here is called the Perpetual Wealth Code™ and it is readily adaptable for anyone who has the desire to become wealthier.

Contact us to attend the Wealth Summit October, 7, 8 and 9, 2016 in Henderson, Nevada where you will discover more about the Perpetual Wealth Code™ and how you can become wealthier.