“So What is the Shame of Being Wealthy?” 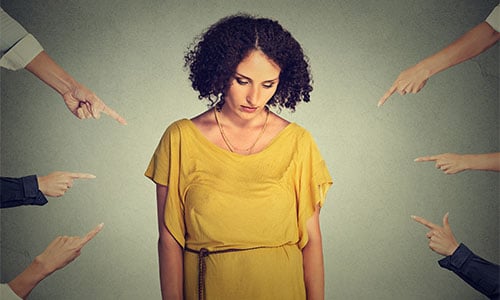 Benjamin Franklin once reported that “Having been poor is no shame, but being ashamed of it, is.”  And his statement is valid. Guilt and shame are not something that we humans were designed to endure.  And the worse form of guilt or shame is the one we falsely assume and carry with us.

One deceptively assumed guilt trip is being ashamed of “Being Wealthy.”  But wealth is merely an expression of the service(s) and value we have provided others unless we have proven ourselves to be sham artists and/or scoundrels.

Ever find yourself assuming guilt for something you had no part of?  Perhaps you felt guilty for losing so much money in the recession of 2008, like so many people I talk to did.  They believed that they were guilty of trying to get wealthy and their losses were a payback for their bad intentions.

How distorted is that?!  Since when is it wrong to save and produce more so you don’t have to become a burden to others in the future but can provide for yourself when you can no longer work as long and as hard as you do today?  Assuming any kind of guilt and shame for this kind of wealth building will destroy your ability to create value and service to others.  That is because the same reasoning behind Franklin’s statement about being poor applies equally to being wealthy.  There is no shame in being wealthy, but being ashamed of it, is.

Wealth allows you to extend yourself beyond the limits of time.  That is because wealth is self-perpetuating.  Wealth is not static but dynamic and therefore sustainable because without sustainability it remains but a figment of materialism and all materialism lasts for but a brief period of time.

Life Benefits is engrossed with the idea that everyone should have the opportunity to keep more of what they make because savings is what makes the economy better for everyone.  But saving for most Americans is not what it’s all cracked up to be.  Robert Shiller, the professor of economics at Yale and the Noble Prize Laureate of Economics, states that “Americans are saving 40 years and not necessarily earning any return.” [i] And that’s not wealth!

The problem is that Americans are hoarding money and not managing the money they save.  Savings is the fundamental necessity of all economic growth because without capitalization nobody progresses.  Not corporations, not government, not individuals.  It takes savings to move forward. But it takes good management skill as well as clear risk avoidance techniques to create a sustainable economic future for yourself.  That is what the Perpetual Wealth Code™ permits and ensures.

Nobody has a desire to become poorer.  We all desire to become wealthier because we innately understand that becoming wealthier is better.  Better for you, better for me and better for everybody.  So what is the shame of being wealthy?  The only shame is being too afraid, too timid, too altruistic, to do something that will make you become MORE wealthy, because becoming more wealthy will increase your ability to serve and produce more value for others.