The Sordid Tale of Two Sisters 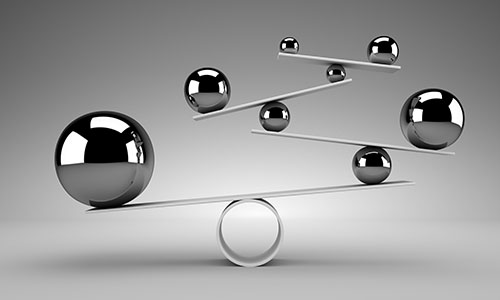 There are some really sordid tales about how Indexed Universal Life Insurance (IUL) is compared to Participating Whole Life Insurance (PWLI) as being almost her identical sister, merely because they can develop such high cash values and both have certain guarantees. But the poignant chronicles of those who have owned, and survived owning, an IUL insurance policy constructs a most daunting tale.  With the penalties, the fees, the low probability of attaining projected returns, as well as the abysmal financial losses suffered, gives reason to why life insurance salespersons attempt to glorify IUL, marketing it as the twin sister of PWLI. In reality, nobody in their right mind would buy an IUL policy if they fully comprehend the dubious consequences such a purchase could spawn.

“It is good that you grasp the one and not let the other slip from your hand. For the one who fears God will end up with both of them.”[i]

This advice was valid in Solomon’s day and remains objectively effective today for those who actually apply it in their decision-making processes. Grandma used to say, “A bird in hand is worth two in the bush.” Distressingly, too often people are lead to believe that if they’ll only let go of what they know to be right, good or guaranteed, then they will be unfettered and more capable of accessing and acquiring bigger and greater things.  This temptation is really nothing new but rather a repetition of the legendary story that took place in that idyllic garden so long, long ago.  Back when the seductive and crafty serpent persuaded Eve to let go of what she had in order for her to take hold of something that he had sold to her as being better than what she already owned.  Wretchedly, we all know the consequences that arose from that first fatal seduction.

Since then, whenever this tale is repeated in life, the consequences of it are just as shockingly stark. So much so that Aesop warned us all by telling the story of the greedy little dog.  The story of a little dog who, while crossing a brook on a small bridge with a bone in his mouth, saw a bigger bone in the mouth of a dog below him (his own reflection in the brook.) The greedy little dog dropped his own bone to grab the bigger bone and ended up losing both.  And that my friend, is the story of IUL.

The purchase of an IUL represents either greed and/or ignorance.  It requires that one discard the tremendous contractual guarantees contained and supplied by PWLI, and running headlong after the alluring but empty assurances implied in an IUL contract. Such assurances, I might add, can make someone falsely believe that you really can get something for nothing, even though pursuing such a pipe-dream has proven ineffectual since the time of that first seduction in the garden.

Accordingly, contemplate Illustration 1, an IUL illustration that guarantees a rate of return on premiums paid.  Note that in year 5 when the client is 40 years old $150,000 has been paid in premiums.  Also notice that the surrender value of this policy is only guaranteed to be a mere $94,017 in that same year.  Now drop down to year 20 in Illustration 1. Observe that $600,000 has been paid in premiums by this time but only $422,894 is guaranteed in the surrender value column. 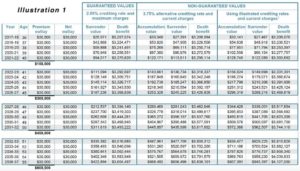 Here is where caution is necessary, because the numbers you just witnessed are not the numbers a seductive and crafty life insurance agent will tempt you to take notice of.  Craftily, they will direct you to focus on the non-guaranteed values of the policy illustration. And if they succeed in attaining their purpose, getting you to take your eyes off the guarantees and to focus, greedily or ignorantly, upon what is not guaranteed, you will be allured into believing the lie, which is, that you can obtain something better than PWLI by throwing away the solid guarantees it provides in exchange for the empty possibilities of an IUL.

You see, the non-guaranteed values are NOT guaranteed, only projected.  So, keep focused on what is guaranteed and you’ll avoid the hidden risks inherently associated with any IUL insurance contract. And here I quote verbatim from an IUL contract:

These actualities, once clearly listed, instead of seductively and craftily hidden throughout an IUL contract, intrepidly expose the idea that anybody can trust the insurance company to act in the policyholder’s best interest should it become advantageous for them to act otherwise.  Nor do such terms in an IUL contract provide any assurance to an astute observer, that an IUL policy holder will ever obtain the non-guaranteed projected values shown in an IUL illustration. In fact, IUL contracts are designed to have the policy owner assume that risk instead of the insurance company having to retain that risk as they do with PWLI.  This fact alone, the risk taken on by an IUL policy owner, negates the very basic purpose of life insurance in the first place, which by definition is to indemnify rather than assume risk or loss. How different is that than the crafty serpent seducing Eve to relinquish her beautiful place in the garden in exchange for future pain and suffering? 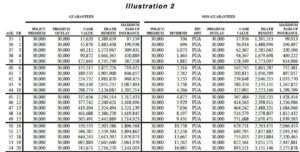 Conceded, the IUL contract does have a higher Death Benefit.  But what is to keep the policy owner, who keeps a level head and isn’t duped into purchasing an IUL insurance policy instead of a PWLI policy, from securing a term life insurance policy at the same time they purchase the PWLI which will make up the obvious difference noted here between the IUL and the PWLI death benefit coverage?

Of course, the answer is, nothing stands in the way of an observant individual from being smart enough to do what is right and most profitable for them. Unless perhaps, some form of greed or ignorance has allowed them to be enticed to believe that they might get something for nothing. 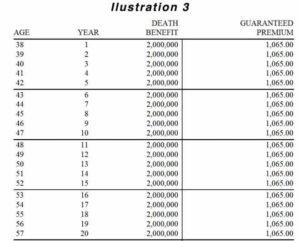 Not surprisingly, we see that it is.  Purchasing the PWLI in Illustration 2 saves our client, $319,777 by year 20 in premium costs.  $21,300 from that $319,777 still leaves $298,477 in our client’s pocket over what would have been there had they purchased the IUL policy in Illustration 1.  Yet combined, the death benefit coverage with the term and the PWLI polices provides significantly greater coverage throughout the entire 20-year period.

Now where could someone use $298,477 that could provide a greater rate of return than what the IUL contract was projecting in its non-guaranteed values?  This of course involves some risk on the client’s part, but certainly no greater risk than the risk the IUL contract exposed them to in the first place.  Furthermore, there is nothing to prevent the client from converting some of their term insurance to PWLI over the course of those 20 years and in so doing use some or all of that $289,477 in doing so.  This will ensure that the death benefit coverage that they have will remain permanent long after the first 20 years.

Tragically, many have been sold the sordid sister, when they believed they were purchasing the guaranteed product PWLI.  So, if you have been duped into thinking about purchasing, or even regrettably already purchased an IUL policy and would like to have it evaluated to see if it is really in your best interest, give our office a call at 702-660-7000.  We will not only provide you with a complimentary review of your IUL policy, but we will also run a comparative analysis for you so that you can decide for yourself if IUL or PWLI protects your best interests going forward.  After all, it is your money and there is no good reason for you not to make sure that you are beholding PWLI and not her sordid sister IUL when the cost is so drastically different over time.