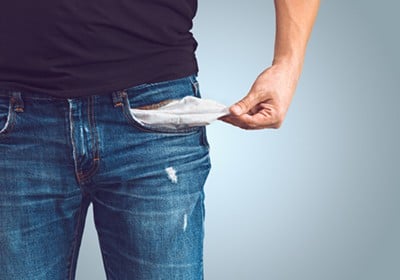 Less than 2 out of 5 Americans have enough money saved to afford an unexpected $1,000 expense. Such an expense would force 1 out of 5 to charge such an unexpected expense on a credit card, leaving the rest to either scrounge it off a friend, family member or take out a personal loan.  Interestingly enough, only 1 out of 10 would consider reducing their other expenditures to pay for such an expense.

Today, nearly 3 out of 5 pre-retirees have no clue how much money they will need to retire on. Yet, 6 out of 10 of those same pre-retirees expect to be able to continue their current standard of living in retirement… even though 1 out of 2 them haven’t begun to save a dime.  And, for what it is worth, nearly 1 out of 2 Americans expect to live past the age of 90. Obviously, the million-dollar question is ON WHAT?

When IRAs and the 401(k) were introduced, retirement account balances were projected to be between $1.3 million and $4.7 million for a 25-year old who contributed between $5,500 and $17,500 annually.  Today we are seeing that these projections were way to high, as retirement account balances average closer to $95,000 and $150,000, for the majority of those that are 65 years old.

This leads us to the question;

In other words, what are you currently saving so that you WILL have enough money to live on and won’t run out of money before you die?

According to the Department of US Bureau of Labor Statistics, the average person in the US spends $236.25 on entertainment per month. That comes to $2,835 a year. Now, if that money were saved annually, instead of being spent on movies and other entertainment, then by the age of 65, a 25-year old could secure $406,410 of tax free income over the next 30 years of their life simply by purchasing a participating whole life insurance policy on their life.

Of course, they may have been able to grow that money faster using a tax deferred account, but then they would have to face taxes of $107,900 during those 30 years in retirement. This is not the best financial plan on the planet because you need all the money you can muster in retirement… and don’t necessarily need to keep paying Uncle Sam.

The key here is: Americans need to save more of the money they make because, currently, they are headed for disaster.  With 9 out of 10 Americans dependent on Social Security in retirement, most have lost their financial independence and the enjoyment that should come with retirement.  And due to extreme medical costs and looming assisted living expenses, many are running out of money before they die. That means saving more money today in a place that guarantees you won’t lose your savings is fundamental to having enough money to last you in retirement.

As a pilot, it is more life-threatening to not be able to land an airplane than it is to take off and fly the airplane. Your savings are your preparation for a safe landing.  Without enough savings (fuel) you will be forced to make an emergency landing.  Emergency landings never end up as pretty or enjoyable as a planned and carefully thought-out landing.

Having savings that are secure and not subject to market correction(s), will provide you the money you need for your retirement.  But, you will need to start today and save more than most financial planners are comfortable telling you to save; otherwise you may crash in retirement.