The Bigger You Are, The Harder You Fall

You wouldn’t work very long without some form of compensation.  But you might be stunned how many people permit their money to work for nearly nothing.

Jeff and Jim are twin brothers.  Jeff believes he can consistently earn 8% in his portfolio and decides he’s going to put $2,600 each year into his investment.

Jim knows that earning 8% consistently is not really a realistic objective, and so he decides to save $5,200, instead of only $2,600, every year.  But he also signs a contract where he is guaranteed to earn a minimal 4% without risk of loss.

At the end of ten years, Jim and Jeff get together to compare notes on their respective returns.

Jeff’s advisor tells him that he should be delighted.  Nearly 30% of his account has come from his earnings. But Jim is happy too because he notices that he has nearly 40% more money than Jeff has.

Historically, there are frequent market conditions that trigger substantial 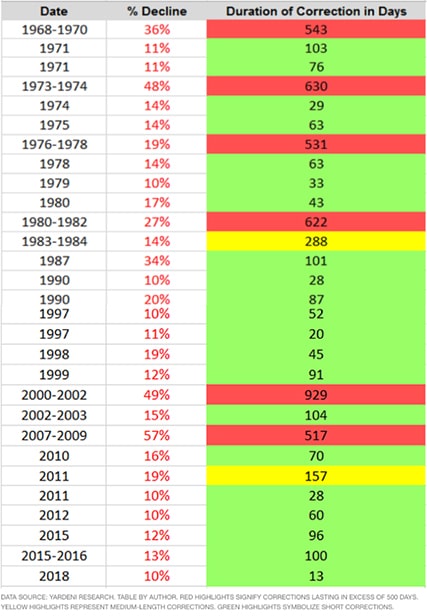 losses.  Here is a chart[i] that details this historical data. Remember, as you examine this data, each decline represents a potential loss for someone.

The problem is that neither you, nor anybody else, knows what the market will do or when it will decline again.  So, unless you have money that you really don’t need or want, risking it in the market can put you in a position to lose it.  Think about this, if you were forced to retire in the 929 day decline of 2000-2002, you’d have been forced to retire on 49% less than what you had planned to retire on.  And the same thing goes for any of these other market declines as well.

Now back to Jeff and Jim.  Let’s say thirty years have passed since they began saving for their retirement.  The year is 2007, and both of them are really looking forward to spending more time fishing, camping and traveling together.  The market has allowed Jeff to earn an 8% average over the past thirty-years and he has a total of $294,536.35 in his account. Jim’s guaranteed account only has $291,641.65.  Jeff is pretty pleased that his gamble of saving less and earning more panned out.

However, one week before they retire, the market crashes.  Jeff’s account is reduced to $126,650.63 almost overnight!  And now Jeff can’t afford to join Jim on their planned fishing trips. Jim, though feeling badly for his twin brother Jeff, decides to take a friend and goes fishing anyway.  Jeff goes back to work attempting to sell HVAC systems to people when they come in to shop at the local big box store.

Think this story about Jeff and Jim is fake?  Think again.  Many people lose more than money when market conditions trigger such losses as these.  Some lose their health, others their homes, many lose their financial independence while some even take their life.  You wouldn’t work without some form of compensation, so why risk your future by allowing your money to work without a guarantee?