The Real Cost Of College 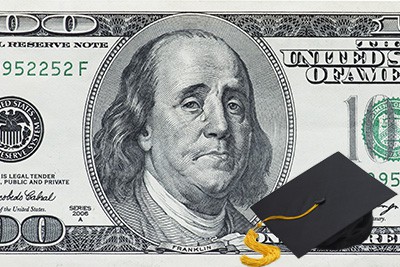 Student loan debt in America today has surpassed 1.5 trillion dollars[i]!  That seems pretty bad, but most people are not able to reasonably visualize how much money 1.5 trillion dollars actually is. This inability is totally excusable since there is only one public company on planet earth that is valued at more than one trillion dollars as of this writing, August 2018, and that company is Apple Inc.[ii] So, virtually nobody deals in trillion-dollar amounts.

In an attempt to better understand the real cost of college, let’s relate student loan debt to things that are easier to fathom. The Las Vegas Valley in southern Nevada is the place I call home, and since Las Vegas is a well-known city, let’s use it for this example.

Let’s go shopping and buy some big-ticket items to find out!

Now that you have an Ice Hockey Team, it would be wonderful if you also had a spot for them to play. So let’s purchase an arena. $375 million dollars[vi] later, you would also be the owner of the T-Mobile arena here in Las Vegas that was built for the Vegas Golden Knights to play in!

But you haven’t spent all of that $9.2 billion. Next, you could build a hotel the size of the Wynn Hotel on the Las Vegas Strip. The Wynn Hotel is considered to be one of the finest hotels in the world. It boasts 45 floors and 2,716 rooms.[vii] If you spent one night in each room, it would take you more than 7 years and 5 months to see each room. After adjusting the building cost of the actual Wynn Hotel for inflation, you would spend $3.26 Billion[viii] to construct a similar hotel today…and, of course, you could also put your last name on the top of it too! Not bad.

But you are still far from spending your $9.2 Billion dollars, so let’s find another big-ticket item to buy.  Oh yeah, there’s also an NFL football team moving to Vegas. The Raiders are scheduled to move from Oakland to Vegas in 2019, so why don’t you buy the Raiders Football Team! That’s a big team and a big brand… can you afford it?  According to Forbes’ valuation of the team, the Raiders franchise is worth 2.1 billion dollars[ix]. Yes, you can afford it!

And now you have a problem. You own an NHL Hockey Team and an arena, with a 20,000-person capacity, for them to play in. You own a hotel on the Vegas strip that is 45 stories tall and has 2,716 rooms…and your name on the top of it. You own one of the largest teams in the NFL. But the problem is that you don’t have a stadium for your NFL team to play in! So, let’s go shopping again. There’s a stadium currently under construction in Las Vegas, being built for the Raiders, with a planned capacity of 65,000 people. The only question is:  Do you have enough of the $9.2 billion dollars left to buy it? You do; construction costs are set to be $1.9 billion[x].

And now that you have finished your shopping spree…the NHL Hockey Team, a stadium, one of the finest hotels (yes, with your name on it), an NFL Football Team, another stadium and guess what? You still have 1 billion of that 9.2 billion dollars left over! It’s time to shop for some smaller big-ticket items…but I’ll leave you with the spending money and let you look into that on your own.

Bear in mind, the 9.2 billion dollars we’ve been playing with in this example is only a small portion of student loan debt in the U.S.  Recall that we divided up the loan debt when we first started this example.  If you repeat this same thing one hundred sixty-three times, that’s what 1.5 trillion dollars looks like.

The real cost of college is incalculable!

What can be done about this massive amount of student loan debt? The first thing to do is to stop indiscriminately adding to it. If more students and parents did some critical thinking and proper preparation prior to college, parents could choose to finance their own children’s college expenses and get their money back. And students could get paid to pick their major and even change their major! I’ll cover how this can be done in a follow up post.