The Tale of the Lonely Musician and the Need He Supplied 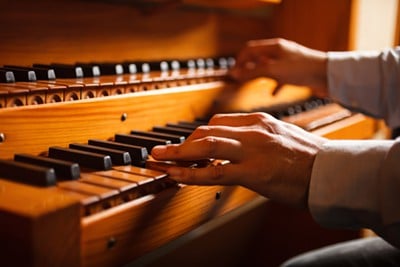 Over 30 years ago, when I first began my practice, a noted musician who performed as an organ soloist as well as in orchestras throughout Europe and the Americas, became a patient of mine. I recall him sharing how he would find himself at 2 and 3am playing some organ in a lonely European Cathedral or musical hall to familiarize himself with the instrument that he was going to perform on before hundreds of people later that week.

One night, while performing his late-night organ rehearsal, a deep sense of emptiness swept over him.  He envisioned his wife and young son at home, thousands of miles away, and apprehended that all the fame, recognition and glory that he had become accustomed to for his mastery of the organ wasn’t worth the price he was paying by missing out on the life he could be having with his young family.

That was his last tour in Europe.  He came home, began to teach music and later became the Professor Emeritus of the University of Wyoming after posts at Westminster College and Western Michigan University.  Today Dr. Arthur Birkby has passed on.  He is remembered and listed in the Arnold’s Comprehensive Survey of Organ Literature as well as a Biographical Dictionary of Organ Composers.  But all that would be meaningless to Arthur because what really mattered to him was his family.

In 2005, when I first began to realize the value of participating whole life insurance, Arthur shared with me his whole life insurance policies that he had purchased years earlier in his life.  At that time, there was enough cash value in those policies that he could have used it to pave the entire parking lot belonging to his church and build an additional building that was needed.  He wanted to know what would happen if he borrowed part of the cash value against his insurance policy and gave it to his church for this project.  I was able to show him how that would benefit both him and his church, but then the church refused to accept his gift.

Here’s a prime example of ignorance thwarting God’s provision. God had already supplied the funds for the need, but humans got in God’s way and blocked the provision He had already provided.

I’ll never forget how the Birkby’s felt after being rejected the opportunity to serve their fellow church members and all because of the incompetency of church leadership.  Disheartening as it may be, this incompetence has been witnessed multiple times since this original incidence and it is absolutely wretched to have to watch how those in leadership wreak havoc through their ignorance of money and how it works.

Here’s what typically happens:  A member of a church, social club or non-profit, has thousands of dollars of cash value built up in their whole life insurance policy(s) and have no need or desire to leave that much money to their beneficiaries.  The policy owner gets really excited about how they might be able to assist their church, social club or non-profit and asks us to approach the leadership of the organization.  Leadership at first is apprehensive and fearful of displaying their lack of understanding about how such large gifts can be utilized, so they drag their feet.  Maybe they are scared of rocking the boat as this isn’t how things have always been done.  Maybe they feel they will lose other contributions due to such a large donation coming in.  Or, they might even believe they will lose some control over how the funds are to be used. Some might even be afraid of losing their leadership role to the one gifting such a large amount to the organization.  But, almost 100% of the time, the leadership is merely too ignorant to see the potential of how a large gift like this would benefit the organization long term. And that is because they believe money is an evil that they are forced to deal with in this evil world, instead of realizing that money is the representation of value or service that has been provided to others.

Sometimes it isn’t worth the effort to try and educate the ignorant.  Arthur certainly understood this when he gave up his illustrious musical career to be closer to his young family. Nobody understood why he would do such a thing.

But, Arthur appreciated the fact that someday his family would be grown and gone and he would have missed all that time with them.  Another thing Arthur realized was that his family would need an income if he wasn’t there to supply it, and so he purchased whole life insurance.

These insurance policies, over time, cost him nothing because the cash values became more valuable than what he had paid for the insurance coverage, which was what provided him the opportunity to meet his church’s need.  But the church leadership refused to accept his gift!  Even though, if they would have accepted his gift, the dividends on those policies would have kept the policies inforce and his beneficiaries would have still become wealthy on the death benefit he would have left them.

That church, to this day, doesn’t realize the gift that they refused to accept.  It reminds me of the story Jesus told in Luke 16 when he said, “The people of this world are smarter in dealing with money than the people of the light.   Use worldly wealth while you can so that when it is gone you will be welcomed into eternal dwellings.”

Incessantly, there are those begging for money who have already refused to be supplied their need because of their ignorance or incompetence.  Arthur is just one example of how God can prepare to meet a unique need, years in advance.  But it only takes some ignorant or incompetent person(s) to destroy that gift.

Keep searching, there are many good causes to sponsor, fund or give to those that are willing to humble themselves and realize that God’s work will never lack for funds, regardless of who He uses to supply the need.

Most of all, realize that by starting today, you can reach a point where the legacy you leave is tremendously awesome, and while you will still have the opportunity to meet needs along the way.  That is the way participating whole life insurance works. And it is why we do what we do here at Life Benefits.  Give us a call today, we can help you begin the journey to greater wealth and abundance, the very thing God desires for you.