Today is Boxing Day – The Day After Christmas 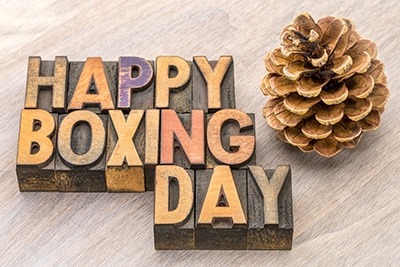 Some days have evolved into being widely celebrated while others are just regular days even though they were once traditional holidays.  Boxing Day, the day after Christmas, is one of those days.  Once widely celebrated, it is mostly forgotten today.

But dating from the early 13th century a “Poor Box” was opened and distributions were given to the needy on this day. Some of these poor boxes, especially in The Netherlands, were made of pottery and shaped like pigs which perhaps became the idea for the “Piggy Bank”.

Many servants were given Boxing Day off to celebrate Christmas with their own family after they had served their masters on Christmas Day. It even became a tradition for delivery workers to collect tips on Boxing Day for the service they had provided throughout the previous year.

But Boxing Day has become much like Participating Whole Life Insurance.  Something once valued and traditionally accepted but now ignored or even frowned upon by those who don’t understand the reasons why it was so important and popular.

In the early years of the Roman Senate, members agreed to mutually contribute to a fund so that when members lost family there was financial support available immediately for the ones who had suffered the loss.

As time progressed, people in different trades guilds and/or fraternities also mutually began to pool their resources together in order to set up benefit plans and financial assets for their members should any of them suffer a loss.  Much like Credit Unions today, participation in these mutual organizations was limited to membership and so many people were left without any opportunity to participate.

The Railroad was one of the first companies in the United States to offer these type of mutual benefit plans for employees.  Soon afterwards others followed. And it wasn’t long before life insurance became a common asset that people understood and eagerly wanted to purchase.  By 1930 there were 120 million life insurance policies in force in the United States, the equivalent to one policy for every man, woman and child living at that time.

Interestingly, in 1976 the government decided that they should regulate how and where you can save for your retirement.  The Employee Retirement Income Security Act (ERISA) was enacted and bingo, tons of new regulations and restrictions were born that simply didn’t exist before 1976.   According to the St Louis Federal Reserve Bank, Americans were saving nearly 17% of their annual income prior to 1976. Today that savings rate is between 4% and 6%.

Does the fact that savings have dropped significantly since 1976, along with life insurance coverage per household, have anything to do with ERISA?  Maybe and maybe not.  But more importantly, realize that as more and more people believe that government and speculation will replace the need for them to save and purchase life insurance, the greater the liability becomes on the next generation to pay for the necessities of life on the previous generation.

Today, according to the Bureau of Labor Statistics, over 40 million people have become unpaid adult caregivers.  22% of those provide care for two parents while nearly 7% provide care for three or more parents. Most of these caregivers are working a full-time job while juggling the care they provide.

How wonderful would it be to declare a Boxing Day for all those 40 million people who are providing the assisted living or long-term care for their parents or loved ones.  But how much better it would be to have people understand, once again, that life insurance companies can provide a permanent solution to this growing financial burden that families are being forced to carry. And the insurance companies can do it for pennies on the dollar of what it could end up costing you.

Today, on this Boxing Day, if you haven’t evaluated your life insurance coverage or you are one of the unlucky people who don’t have any life insurance yet, realize what you are exposing yourself to.  We at Life Benefits can help you rectify that problem for pennies on the dollar compared to what it will cost you if you don’t do something about it now.  That’s because life insurance isn’t just about the death benefit but about the life benefits as well.

We’re out of the office today enjoying the holiday Boxing Day, but please still contact us with a time you’d like us to call you next week…and what number is best.